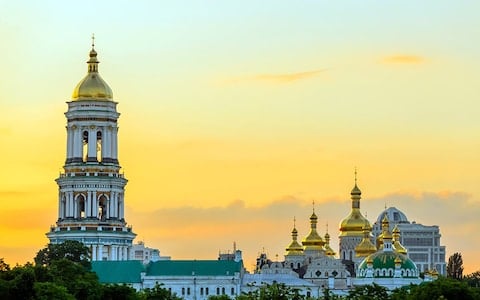 All about Ukraine: You might not associate Ukraine with a tourist getaway but the largest European nation by land area is home to more than a few gems.

The former Soviet territory boasts vast tracts of untouched nature, some truly astounding religious architecture and fascinating military history. Rounding off its unique appeal is the mix of modern designs and the intriguing vestiges of the former USSR. Together, they account for 8 bio-reserves, 24 Nature Reserves, 49 national parks, 7 UNESCO World Heritage Sites and 39 museums of national interest and significance.

Ukraine has a very rich cultural Christian history and remains a religious nation proud of its heritage.

Kyiv’s oldest standing church is over a thousand years old and is named for the Hagia Sofia Cathedral in Istanbul. Just as the golden domes are characteristic on the outside, this complex can be identified from its interior by the cast iron-tiled floors.

Built adjacent to the royal palace, it has borne witness to coronations and treaty signings. It was also the site of the city’s first school and library. Several small museums pepper the cathedral grounds.

Widely considered the holiest site in the country, the Lavra was founded in 1051. The elaborate gold domes may be a pleasing aesthetic but the real draw of the former monastery lies beneath your feet.

Dug out by Saint Anthony of Greece and local Feodosy, the catacombs have become seemingly miraculous tombs. The non-embalmed monks’ bodies interred here have not undergone any decay despite centuries passing since their demise. And, yes, they are on display.

National Parks are often located a fair distance from the capital city. You can try public transport but if you want your freedom and prefer making your own itinerary, a rental car in Ukraine is the way to go.

Mezhyhirya was not planned to be the National Park that it has become today. It’s 137 hectares that include tennis courts, a golf course, horse stables and even a zoo were the private residence of former Ukrainian leader Viktor Yanukovych.

At the centre of the estate is the elegant pinewood country house that served as his holiday home. There is a museum of exotic cars adjacent as well as a rare-breed dog kennel. Nearby, there are several quaint and beautiful churches.

Originally constructed in the 10th century, this fortress underwent several redesigns and additions over the next 300 years. What we have today is a large complex dominated by nine towers enclosing a polygonal courtyard.

Look for the 40-metre-deep well hewn out of the cliff rock that still functions today. There is a prison tower as well as a hole in the ground that served as a debtor’s jail. A museum gives visitors deeper insight into the history of both the fortress and the region.

Dominating the skyline at 91 metres and built of 12 tonnes of titanium, the ‘Nation’s Mother’ is a sister statue to the renowned one of the same name in Volgograd. There are two viewing towers, one at 36.6 metres and one at the top of the warrior’s shield.

History buffs will love the Great Patriotic War Museum at its base. Take in your fill of tanks, helicopters and other assorted military hardware. There is also an eternal flame honouring the victims of WWII.

This ominously-named area was a top-secret German military regional HQ in the early 1940s. Reportedly frequented by Adolf Hitler himself, it was a complex of 20 buildings that included a film theatre, casino and swimming pool as well as three bunkers.

Blown up by the retreating Germans, almost none of it remains save for hulking masses of concrete and reinforcing rods. Still, there is a deep sense of history to the area where over 4,000 people lived and worked during very tumultuous times.

Featuring a rotating body of work from some of the most recognisable and respected names in the world of art, this art gallery is focused on contemporary art and design.

Feast your eyes on the creations of luminaries such as Damian Hirst and Ai Weiwei before making your way up to the coffee house with its excellent view on the top floor.

Khanenko Museum of the Arts

While the works inside are worth the visit, this 19th-century building is no less a work of art in itself. Detailed woodwork and stunning frescoes enclose visitors in an elaborate cocoon of artistic expression.

Paintings by Rubens and Bosch stand beside ancient Greek sculptures and ceramics. On the top floor, you will find four rare Byzantine icons for the 6th and 7th centuries.

This is just a small sample of the wonders that await visitors to Ukraine. It is one of the undiscovered treasures of the former USSR and well worth a detour from the usual tourist trail.